As most of you know, I’ve been trucking along in graduate school, and during my short story class, I encountered a little jewel of a book written by Ronald C. Flores. I’m a huge fan of the short story, and this collection is a montage of excitement. 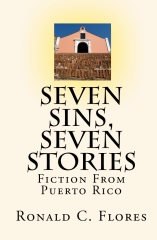 Sipping on a cocktail, whether shaken or stirred, reminds me of how diverse flavors can mix into one tasty alky-treat, and reading Ronald C Flores’ collection of short stories Seven Sins, Seven Stories Fiction from Puerto Rico is like enjoying a complicated, delicious concoction. Flores’ language is simple, yet complex as he chooses his words carefully. He does not waste space with fluff. Every word there has a purpose. His writing is — raw when his story calls for it, poetic at times, colloquial and formal at other times – but always in corellation with the happenings within the character and their story. These tales are quite approachable – the shots of Spanish in his stories are easy to figure out from the context. All of his stories either take place in Puerto Rico or involve someone from, as he calls it “The Uncommonwealth”.

And uncommon is an understatement to the variety of flavors in his compilation. He introduces us to a wide-range of characters and stories. Aside from the common Puerto Rican aspect, these stories are mixed together seamlessly only through his references of the seven deadly sins in the titles; otherwise, each of these stories could stand on its own. Placed together, though, I got an eccentric, enigmatic, and enjoyable read. Flores’ characters are authentic, and no matter what the protagonist’s gender, age, or class may be, their story, their sin, is relatable. Every possible emotion, kind or ugly, is experienced in these tales, and each and every one of us has faced the characters’ situations on some level. When I say his characters are a fusion of flavors, I’m not exaggerating – where else could you read about a paranoid young man, a bitter widow, a talking penis, a gentle giant, a snobby rich girl, a foodie, and a Catholic school girl?! It’s like the beginning of a bar joke.

His stories, though, are no joke. He mingles humor, poignancy, simplicity, and complication into one beverage of self-reflection. You can’t help but put yourself in these characters’ shoes as you read of their struggles ranging from identity issues to uncontrollable urges wrapped into a shadow of one of the seven sins, but Flores is able to end each and every story with a splash of a silver lining – however minor it may be. Don’t let the title fool you either. These stories are not scary or highly religious, the sins serve to simply set a stage for the story to come. Plus, it is his way of calling attention to the “sinner” in all of us.

The first “sin” we are introduced to is Anger where a guy with sociopathic tendencies and extreme paranoia is on display for an unsuspecting Kenneth at the bar. I was then whisked away to a funeral where a sly widow is not sad for spending extraordinary amounts of money on her stingy husband’s funeral in Avarice – hell hath no fury as a woman scorned! Then I am in the mind of an adolescent male who is obsessed with Walter, his penis with an attitude, need I say more?  Lust. My heart is then captured by the handsome, yet Forrest Gump-like, Juan Bobo, who lives simply and purely while surrounded by jealous jerks in Envy. The surreal and dream-like tale of Milly, in Sloth, tells a story of avoidance when it comes to discovering one’s roots in this surprisingly pleasant tale of an adopted Puerto Rican girl. Flores lightened my mood with Gluttony as he sneakily shows us how food can be a uniting factor between people of different cultures through a food-obsessed professor. Pride slapped me in the face with a too-relatable character of a sassy, stubborn Catholic school girl who treats her mother like a distant part her identity only to later be saved by the very woman she loathes.

This book is like bar-hopping through Burbon Street with a Puerto Rican twist. Through his stories, he kindly reminds all of us of our fallible nature, but also our opportunity for redemption and overcoming our vices and weaknesses.

Lucky for us, Mr. Flores is working on another novel, “I am in the midst of a novel that I expect to publish at the end of this year.”

"Above all, watch the world around you with glittering eyes because the greatest secrets in life are hidden in the most unlikely places. Those who don't believe in magic will never find it."

A Life With Psoriasis

All about living with Psoriasis

My life and living with psoriasis

My Personal Experience with Psoriatic Arthritis

strategies and support that saved my life

Over My Styled Body

A personal style blog, giving fashionistas a daily dose of style one outfit at a time

Smile! You’re at the best WordPress.com site ever